Athena TV is honored to have received a Brillante Weblog award from M.Christine Valada of Out Of The Darkroom. If you haven't read Chris's blog, look there for her commentary on pop culture and actual culture, office politics and actual poltics, horses and hand grenades. It is also ironically often a better place to find news about her husband, Comics Legend Len Wein, than his own Weinwords. I also enjoy her food blog, Into The Kitchen.

The award itself works like the old Breck Ad, "...and she told two friends." Each recipient is asked in turn to present the award to their seven favorite blogs. So here they are, my daily rounds of reading:

Lisa Klink's What It's Like tells it like it is from the perspective of a working TV writer. Nine times out of ten Lisa's blog tells it like I would tell it, but pithier. Not too surprising, since she and I have similar resumes in many ways. Once in a while, I have a differing take on an aspect on the business than hers, which I plan to use as launching points for future posts.

Jane Espenson's Jane in Progress focuses on advice for burgeoning writers working on their specs. And lunch. Jane's wit and wonder make the blog worth reading even if you're not in the target demo.

The Anonymous Production Assistant's Blog is not only fun to read, it's a great aggregator -- the A.P.A. is a treasure trove of links to other cool sites and articles. Just today, I followed the trail from there to David Bordwell's site for cineastes.

I can't choose between Eugene Sons's excellent blogs, so I'm going to give Brillante Awards to both his Eponymous Blog , which is an entertaining and enlightening look into the TV Biz from the Animation standpoint, and to his Crazy Dad's Guide to Family Travel, in which he drags his family around the world and shares tips for not killing or being killed in the process.

The Grub Report is the blogging home of Stephanie Vander Weide Lucianovic, a.k.a. Keckler from Television Without Pity, who wrote the TWOP recaps of food-based reality shows. Her Grub Report is an enticing melange of food blogging and pop culture musings. It is also the source of the incomparable roasted cauliflower recipe.

My seventh must-read blog is one that's written anonymously by a friend; since I can't compromise that person's anonymity by linking to it here, I'll close out my list at 6 and hopefully leave you wanting more. Not eligible for the Brillante, but currently at the top of my reading list, is the Hero Complex blog at the LA Times, a great round-up of the latest Geek News. Check out today's post about Zuda web comics, and Shock Effect in particular.

All you Brillante Winners, pick up the award by copying it from here, paste it to your blog, put a link back to this one, and pass on the award and instructions to seven of your favorite blogs by letting them know about it.
Posted by GH at 11:22 AM

I've already passed it on. 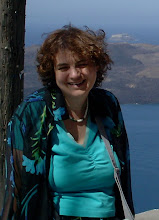 GH
Gillian Horvath is a writer of hourlong television, primarily sci-fi action, often Canadian, from Highlander and Forever Knight, to Flash Gordon and Sanctuary. She was Executive Producer/Head Writer of Primeval: New World, for SPACE and Syfy. Gillian is currently writing on the CW's Beauty & The Beast. Athena TV is her place to geek out about TV and sci-fi that excites her.